Choosing the right model speaker can be a challenge. But even more trying for some people is choosing the right veneer. Sure, looking at pictures of speakers we’ve built over the years can be helpful. But there are even more options out there. So I thought that perhaps a few words about veneers and links to a few sites might be helpful. 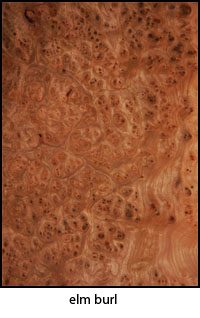 When searching for a veneer, you need to recognize that wood is created by nature, not by man. With most woods, there is a lot of variation from log to log. I cannot tell you how often we receive emails requesting “a pair just like these on your web site – photo attached.” Sometimes it is not a problem. But we tend to search out very unique veneers and when the batch is gone, it is gone. So some of our speakers are simply impossible to duplicate.

So let’s look at some potential veneers. Here is a link to the first of 13 pages of veneer scans: B & B Rare Woods

This is one of the most complete collections of veneer photos I have come across. I often send this link to people searching out the perfect veneer. But when I do, I have to point out that these are among the best photos of the best specimens of each particular veneer. In some cases, finding batches of that specific veneer as spectacular as those shown can be impossible.

The lesson: Seeing a picture of veneer you like doesn’t mean you can get it.

Here is a link to another site: Certainly Wood

This site is different – the veneers are available. If you look at the top section on the home page, you will see a button labeled “Search Veneer Inventory.” The nice thing here is that the search results will show batches of actual veneer that ARE available. The downside is that the photos may not be all that accurate in terms of color and/or the lighting may not show the true beauty of the wood. What’s more, the veneer is raw and unfinished. When you apply finish to many veneers, the color can change dramatically. Generally the contrast between lighter and darker sections of the wood will increase quite a bit when finish is applied.

These two sites should provide a pretty good idea of what is available. If you want to know how a particular veneer might look after finish is applied, just ask. We’ve worked with most of them and have a pretty good idea of how a finished veneer would compare to a photograph of that same veneer in a raw, unfinished state. 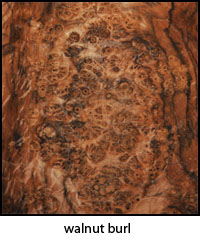 People looking for exotic veneers are often attracted to burls. These can be among the most stunning veneers created by nature. But there are a few things you need to keep in mind.

Burled wood is not all that common compared to plain varieties of the same species. That fact, coupled with demand, mean the price of burls can be quite high – 5-10 times more expensive. But that is just the beginning.

Sheets of burled veneer tend to be small. Which means many sheets may have to be spliced together to form a panel large enough to cover the side of a speaker. This leads to two problems.

First, you have to find batches with enough sheets to complete the project. If you need four sheets spliced together to cover one side of a speaker, you would need a batch of 16 sheets just to cover the sides of a pair of speakers and more for the tops of the cabinets. If you want a complete home theater in the same finish, you can easily see that the number of sheets you need may exceed the number available in a given batch. And you can’t simply add sheets from another batch to make up the difference as it is highly unlikely that they will match.

The second issue again relates to sheet sizes. Let’s say a sheet is 10″ wide and the side of the cabinet is 12″ deep. This means you will have to splice two sheets together to cover the side panel. So you would most likely book-match the pieces and splice them together. This splice looks best when placed centered on the panel. So you end up with four extra inches on both sides. Once you trim them off, they are too small to use for anything else.

So, not only do you have veneer that is more expensive per square foot to begin with, but you end up wasting quite a bit of it, driving up the cost for each square foot you actually use.

Nature can produce some fabulous looking woods and burls are among the most eye-catching. But keep in mind that they are costly to begin with and even more costly when you consider that much of it may go to waste. 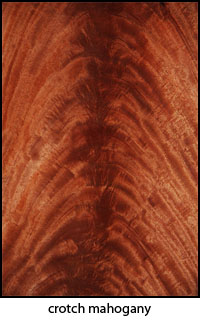 Crotch veneers are another type with a great deal of appeal. Crotch mahogany is a good example and has been highly sought after through the ages.

Typically, you want the crotch pattern to cover an entire speaker panel. So if you have a speaker that is 40″ tall and you have crotch veneer sheets that are 38″ long, they will do you no good. You need at least 41″ or so to allow for trimming.

If you look at crotch mahogany, you will see that it is often available in sheets sizes from 24″ to 72″ or more in length. The look of individual batches can vary from somewhat interesting to truly amazing. If the sheet you like is 72″ long and 30″ wide, you have to purchase eight sheets minimum just to cover a pair of speakers. But of the 72″ length, you will only be using 40″. And you won’t need the 30″ width either.

As with burls, the base price of a crotch veneer may be 5 times as expensive per square foot as a non-crotch version of the same species. But that is just the beginning. The final cost in a finished pair of speakers will also depend on the yield, as much of it may go to waste. 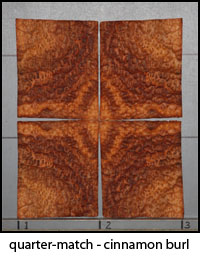 Some trees are large, some are small. When they are sawed into veneer, you end up with very wide sheets and very narrow sheets. So, very often, you need to splice veneer in order to end up with a panel large enough for the side of a speaker.

When we work with narrow sheets of veneer, we normally splice them in what is referred to as a book match. Imagine taking two sheets from a sequenced bundle of veneer and opening them like a book. When the two sheets are spliced together in this fashion, one half appears as a mirror image of the other half.

Depending on how dramatic the grain and/or figuring is, you can end up with some rather striking patterns.

Most of the time when we splice veneer, it is because that particular veneer is not wide enough to cover the panel we are about to veneer. But sometimes, even if the veneer is wide enough, we splice it anyway because the patterns created by a book match are so striking. 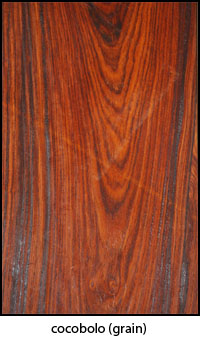 the difference between grain and figuring

People are often confused about these two terms. So I thought a few words here may help avoid miscommunication.

When you talk about wood grain, you are referring to the contrasting lines of color running through the wood. Rosewood is a great example of a generally dramatic grain structure. The blacks, browns, reds, oranges, and caramel colors create the striking grain patterns rosewood or cocobolo are known for.

On the other hand, take a wood like quilted makore. The grain in this example is not very dramatic. The contrast between the lighter and darker sections is not all that great. But there is a three-dimensional curly pattern running through the entire surface. This visual aspect that makes wood appear to be three-dimensional is called figuring.

Some woods, like cocobolo mentioned above, are known for their great grain patterns. But they generally do not have much in the way of figuring.

Others woods, like this makore and quilted maple, are known for their spectacular figuring, but generally do not have very dramatic grain structure.

Still others, like African bubinga, can have both a dramatic grain structure and fabulous figuring. 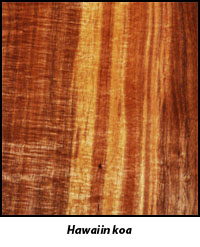 There is one other aspect of wood that may be of interest. It is called chatoyance and refers to the sparle or shimmer in the wood itself. This is due to the way light is reflected off the wood grain. Some woods, like koa or mahogany, have a great deal of it. Other woods have very little and are rather 2-dimensional in comparison.

Whether a wood has a good deal of natural chatoyance or not is normally something most people don’t consider. But that is mostly because they are not familiar with the term and don’t know to look for it. But the more it has, the more interesting the wood is when viewed close up.

Brazilian cherry and ribbon-striped mahogany can look much the same from a distance. But up close, the mahogany displays much more sparkle than the rather flat looking cherry. Both are very nice woods, but given a choice (knowing that the choice exists), I think most people would prefer the mahogany.